Overwatch is the latest big hitter in the world of eSports and it looks set to hit hard, especially here in the United Kingdom.

The Masters Gaming Arena (MGA) has today announced that registrations for its 2016 Championship are open, with the grand final to be held at the end of this year in London. 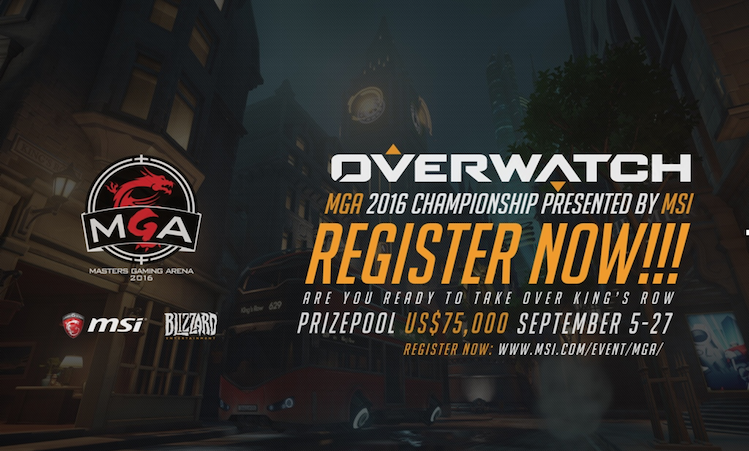 The championships are open to all, with registration for teams open now. If you think you can make it all the way to the top four, then you could potentially be claiming a share of a tasty $75,000 prize pool. $40,000 will go to the winners, while the second, third and fourth place teams will receive $20,000, $10,000 and $5,000 respectively.

If you think you can whip up a team of five to take on the world, then this could be the place for you. Registration for the tournament is here. (Be quick, entries close September 27 at 23:59 CST, or 16:59 GMT September 28)

Here’s how the format will go down:

Qualifiers will happen in early October, with the regional finals taking place in mid-October ahead of the Grand Final. If you manage to make it as far as the Grand Final, then you could be duking it out at Gfinity’s Arena in Fulham, London. (I’ve been there once before; it’s a really cool place for watching eSports!).

If you’d prefer to watch the finals when they take place on December 7-8, Gfinity will be opening up ticket sales soon. Keep an eye on their website if you fancy coming along to London to watch the showdown. It’ll also be streamed on Twitch, if London isn’t within travelling distance.