I don’t do zombies.

I don’t do zombies and I especially don’t do crazy hillbillies crazing me around a run down Lousiana mansion with a truck full of crazy and a goddamned chainsaw.

Needless to say, I played about ten minutes and was immediately regretting my life choices.

On the surface, Resident Evil VII looks like a refreshing angle on the horror genre; we’re forgoing dank asylums and outlandish  set pieces for a good ol’ fashioned haunted house in the deep south. I’ve always enjoyed this kind of horror; cannibals, hillbillies, and general terror in a mundane setting, and it’s such a change of pace. We ain’t dealing with the supernatural, we’re dealing with people and several hundred shout outs to horror movies of the last twenty years. Forget zombies, we’re just casually reminiscing about Texas Chainsaw Massacre, with this… delightful dinner scene.

The entire aesthetic just oozes unease. Ethan is trapped in a relatively normal looking house that reveals something grim around every corner. The familiar is suddenly unfamiliar, and places of comfort make you want to turn tail and run; the sound of the phone ringing is likely to induce outright panic. The creaks and groans are just the house, right? Definitely not Jack stalking you through the house.

It’s all dimly lit and flickering shadows, that oddly enough, reminds me of Fatal Frame II, where what lurked in the dark was something just out of reach, and making you dread what you’d find every time you opened a door. While the atmospheric graphics are great, the character models aren’t spectacular; there’s a definite lack of motion capture on the Bakers, and Mia’s hair looks downright weird. It works in some aspects, mostly because the Bakers look downright horrific, and not so much in others – the dodgy facial animations are really noticeable. Then again, I suppose it doesn’t matter when you’re creeping about dark hallways.

This game does a damn good job of making you afraid of nothing. You have an initial blast of action, and then… nothing. Everything goes quiet. You’ve seen Jack following you, and now he’s wandered off somewhere, so… what? What’s going on? Where are the monsters, or, rather, where on earth are these monsters hiding, watching Ethan’s every move? It’s fantastically paranoid; even Ethan’s walk animation is a slow, tentative tread, trying his best not to alert anyone to his presence. Being able to close doors behind you is a nice touch, because it makes you think that something is going to follow you through them, and that flimsy piece of wood is going to stop them. It gives you a false sense of security, because Jack caught me in the room with the shotgun, off the Rec Room, and scared me half to death. Rest assured, you are not safe in the Bakers’ lair, and they’re going to make damn sure that you know it.

In comparison, the Molded… don’t feel creepy at all. They’re mindless golems that crawl out of the wall or the odd morgue tray, if they’re feeling so inclined, but after you’ve gone toe to toe with a chainsaw wielding maniac and a woman who can set swarms of bugs on you, something that looks like it wandered out of that “Seeds of Doom,” episode from 70’s Doctor Who don’t quite cut it. Similarly, it almost doesn’t feel like there’s enough in the way of scares. There’s plenty of creepy detritus lying around, sure, but the silence can become deafening. It’s mostly jump scares and not a whole lot else, which almost feels like a waste. 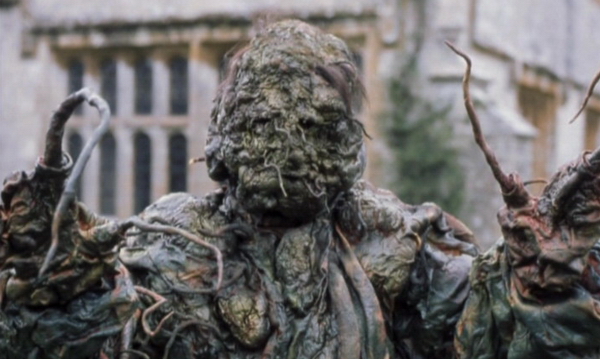 Just in case anyone wondered what I meant (from here: http://www.doctorwhoreviews.altervista.org/4L.htm)

The combat is simple – point and shoot, though you’d better not waste those bullets because God only knows there aren’t enough of them. You get a handful of different guns, a knife, and a flamethrower; not that they’ll do a lot of good, since each Baker and the Molded take five or six hits to go down, even on the Easy combat mode. In fact, pretty much every item is scarce, and healing meds are rarely found in one piece; you have to combine them together. I actually found the shooting pretty smooth, without all the wonky controls people were complaining about, though this may be because I was using aim assist. so high five to Capcom to helping us visually impaired people out!

The puzzles, too, are a nice change of pace, and delightfully lampshaded by Ethan when he quite rightly asks who’s building all this shit. Lucas Baker’s had a lot of free time on his hands these past three years, so our budding sadist engineer has gotten a lot of work done. The place is littered with puzzles that are the right amount of difficult – they aren’t cheap, or definitely require a guide to figure out, which is always nice to see. And, of course, they’re served up with a healthy dose of creepy.

The plot started out as something really good. As I said above, the market has become somewhat saturated in demonic, gothic horror, and at some point, it stops being scary. The “Humans are the real monsters,” trope is one that’s been used increasingly less over the past few years, so this is good. I can get on board with batshit crazy humans and something about a bioweapon. This was going great until I heard the name “Eveline,” and everything fell off a cliff promptly after you confront Lucas.

So, the Bakers. Cannibals, kidnappers, and generally all round crazy Southern folk. They’re recruiting people for their “family.” What’s this family do? We don’t know. Probably involves some unsavoury stuff. It’s gory rather than spooky, and it’s a nice change of pace. Little girl with pale skin, long black hair, and wants a family because she was deprived of one? Oh wait, where have I heard this before:

Eveline is one massive cliché that ultimately drags down the terror of the Bakers. We’ve got Chainsaw Jack and his stalkerish tendencies, sweet Marguerite who loves bugs and good old fashioned Southern hospitality, and Lucas who has a cruel, crazy streak a mile wide. Then there’s Eveline… who just has superpowers and is a poor, forlorn little girl who just wants a mummy and daddy. Combining that with the dull ship segment that doesn’t have the charm of the Baker mansion, and it doesn’t leave players with anything memorable. Their boss fights are loud and flashy, full of bugs and chainsaw fights. Eveline’s is just… “go away, you’re mean!” and shoving Ethan away with ~spooky~ powers.

The Bakers are interesting from the start. Eveline isn’t, and you don’t even need to modify the plot that much if you cut her out of it. If you shift the infection to a bioweapon that was accidentally unleashed in the swamps, and the Bakers became Patient Zero. Boom, done, no more Eveline. Perhaps flesh out Zoe, Ethan, and Mia, too, while you’re at it. I like the Bakers being the victims, but even if they weren’t, I’d still think they were incredible characters, for a place in the history books.

On the whole, though? A damn good scare.

PEGI 18 and M rated in the US, for “Blood and Gore, Intense Violence, Strong Language.” Basically, see my introduction about crazy hillbillies chasing Ethan with chainsaws; most decidedly not child-friendly.

Disclaimer: This review is based on a retail copy of the game provided by the publishers for the purpose of this review.