Activision and Nickelodeon are taking you under the sea by teaming up with SpongeBob SquarePants and his Bikini Bottoms friends in SpongeBob HeroPants, a new video game based on Nickelodeon’s hit-animated TV series. This action platformer arrives in March on Xbox 360, Nintendo 3DS, PS Vita and PlayStation TV.

All is not well in Bikini Bottom following the events of Paramount Pictures’ The SpongeBob Movie: Sponge Out of Water, the new animated/live-action feature film hitting UK cinema screens on 27th March. SpongeBob’s dreams are coming to life and altering space and time beneath the waves. SpongeBob must join forces with his friends to unlock their hidden abilities and put back the pieces of his shattered cartoon psyche. Along the way they’ll visit alternate forms of Bikini Bottom as it is warped by SpongeBob’s mind into prehistoric, war zone and candy-coated versions of the town.

SpongeBob HeroPants is an action game with a focus on platforming, exploration and light puzzles and combat. Each of its six playable characters – SpongeBob, Patrick, Squidward, Sandy, Mr. Krabs and Plankton – can morph into a unique super-powered champion to solve challenges, unlock new areas and defeat SpongeBob’s crazy imagination. The full adventure features boss battles, upgradeable skills and a treasure trove of hidden items to unearth. It also includes four-person local drop-in/drop-out cooperative multiplayer on Xbox 360. 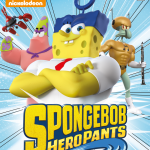 How Online Gaming Has Changed Over The Years