Review: Not A Hero 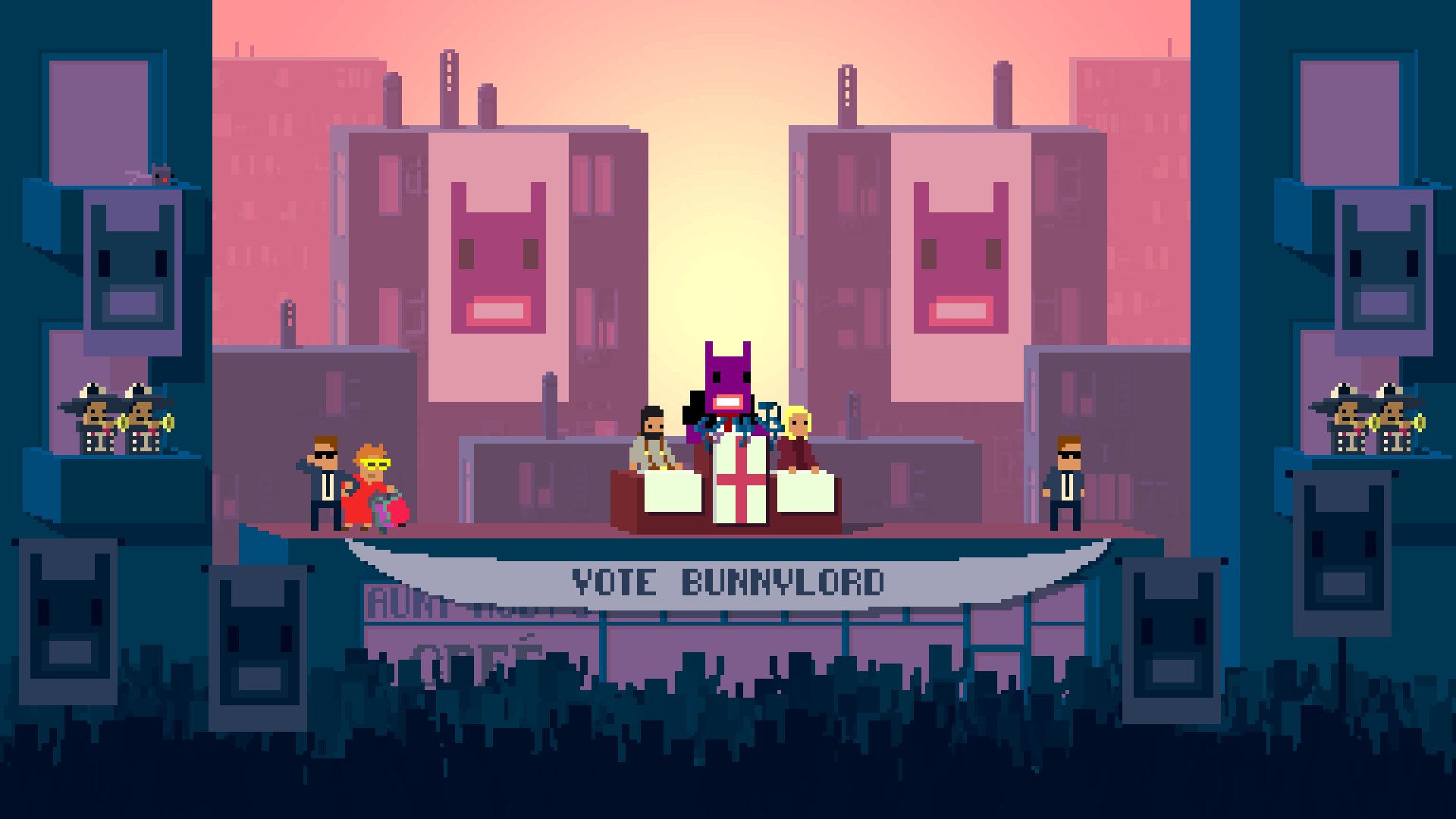 Gutted that the Monster Raving Loony Party didn’t get a seat? Did you wish that the Pub Landlord Al Murray’s Free United Kingdom party succeed? If the post election blues are getting you down, then it just so happens that an aspiring candidate is more than happy to listen to your views. He may ask for milkshake in return though. He likes milkshakes.

Not A Hero is a 2D cover-based shooter that follows BunnyLord on the campaign trail towards mayorship of the good town of Vodkaville. He sticks out in the crowd amongst your typical citizen of Vodkaville, mainly because he is an anthropomorphic purple rabbit with a mean streak. He’ll happily talk up his policies (and himself), but is equally as happy blowing his political enemies to smithereens. If it wins him votes in the election, the human/animal cost involved matters not.

To further his cause as the campaign reaches its final weeks, BunnyLord recruits a few gun-toting ‘political activists’ to spread his word and remove obstacles in the way of BunnyLord’s success. That’s where you, the player, come in!

Taking control of one of these ‘activists’, you’re tasked with a different key objective each time. Most of these objectives typically involve shooting things or exploding things in various scenarios. In this shooter though, running in guns blazing will almost certainly lead to death. Here’s where the cover mechanic comes in.

In Not A Hero, your key to survival is through employing the very same tactic that we know and love in 3D games like Gears of War: Get into cover, scope out your enemies, stick your head out and fire off a few rounds then slip back into cover. Unlike the chest-high walls of Gears however, you slip into the shadows behind desks and other such furniture with the simple click of a button (on a controller, which I recommend you use). When out of cover, you can slide around to get into cover or even slide towards your enemies to knock them to the ground.

These options, along with ammo upgrades and consumable projectiles, create a wide array of tactical options. To add another layer onto the thinking process, there are optional objectives which add to BunnyLord’s approval rating when completed. As that approval rating goes up, the chances of BunnyLord’s success in the election also goes up. It also inspires other ‘activists’ to join the BunnyLord party’s cause, each of which has his or her own special perk and comical voice acting. The voice acting made me chuckle, wince, and then chuckle again. As Vodkaville is a fictional British city, the accents are pulled from a wide variety of cultures and nationalities that make up the populace of this lovely country. One that stuck out for me very quickly was Cletus. The name suggests otherwise, but he is a Scottish lad that moved to Vodkaville from the good city of Glasgow.

To this Scottish guy here, the accent very quickly jumped out to me as what a Scottish accent would sound like if someone who isn’t Scottish attempts it. For a moment, I thought that it was stretching the stereotype a little bit. However I did notice that all of the characters were stretched to their aural limits. Steve, the game’s first character, was undeniably the ‘London geezer’ type; Samantha, on the other hand, was extremely Welsh. Their tonalities will probably make us humble Brits wince in our own locales, however I’d be lying if I said I wasn’t laughing at some of the stuff that Scottish Cletus was chucking out. BunnyLord himself is of course not exempt from some comical writing, however all that public speaking seems to have reduced his voice box to producing squeaks and bloops. That’s probably why he relies on sublime PowerPoint presentations to illustrate his point.

That comical factor is something that I discovered through the vast majority of the game, and I loved it more for that. One consumable weapon that had me in stitches was the Kitten Bomb. Yes, it’s actually a thing.

In what seems like a tip-of-the-hat to the developers of Worms over at Team17, the Kitten Bomb meows and walks to a target then drops the plunger on a TNT bomb, destroying everything in its vicinity. Cute, yet extremely deadly.

The comedy and the gameplay was what really shone through to me during my time with the game. The optional objectives had me scratching my noggin’ to figure out how to ace each level, whilst the characters duly delivered their catchphrases to give me a good giggle along the way. BunnyLord’s briefings at the ‘BunnyLord Fun Club’ and subsequent debriefings in the local milkshake parlour were equally full of hilarity that almost served as a way of inspiration to get me through particularly difficult levels. I found myself wanting to hear more of what BunnyLord had to say. Sounds like bonus points for BunnyLord’s political skills in that regard!

The many deaths and restarts, gratuitous violence and amazing soundtrack reminded me a lot of another certain title published by Devolver: Dennation’s Hotline Miami. In a way, Not A Hero is the forever smiling British cousin of Hotline Miami. He’s a cousin that got quite interested in politics, even if his description of politics involves putting bullets in gang-members’ heads. He’s a lot more sane than his Stateside relative of course, although he prefers to use cute kittens and laser beams instead of covering every square inch of the floor with blood. The Brit’s a bit stronger too, the poor American falls to the ground after one hit.

Side by side, I prefer the smiling Brit. Even if his jokes and impressions approach the line a wee bit, it’s always grounded right back into place through other nuggets of humour that he’s got stashed. If you like the sound of that smiling Brit like I did, then Not A Hero is definitely worth your attention.

Not A Hero is game that’s jam-packed full of guns, blood and naughty words. Not for the kiddies, if the trailer didn’t give you that impression.