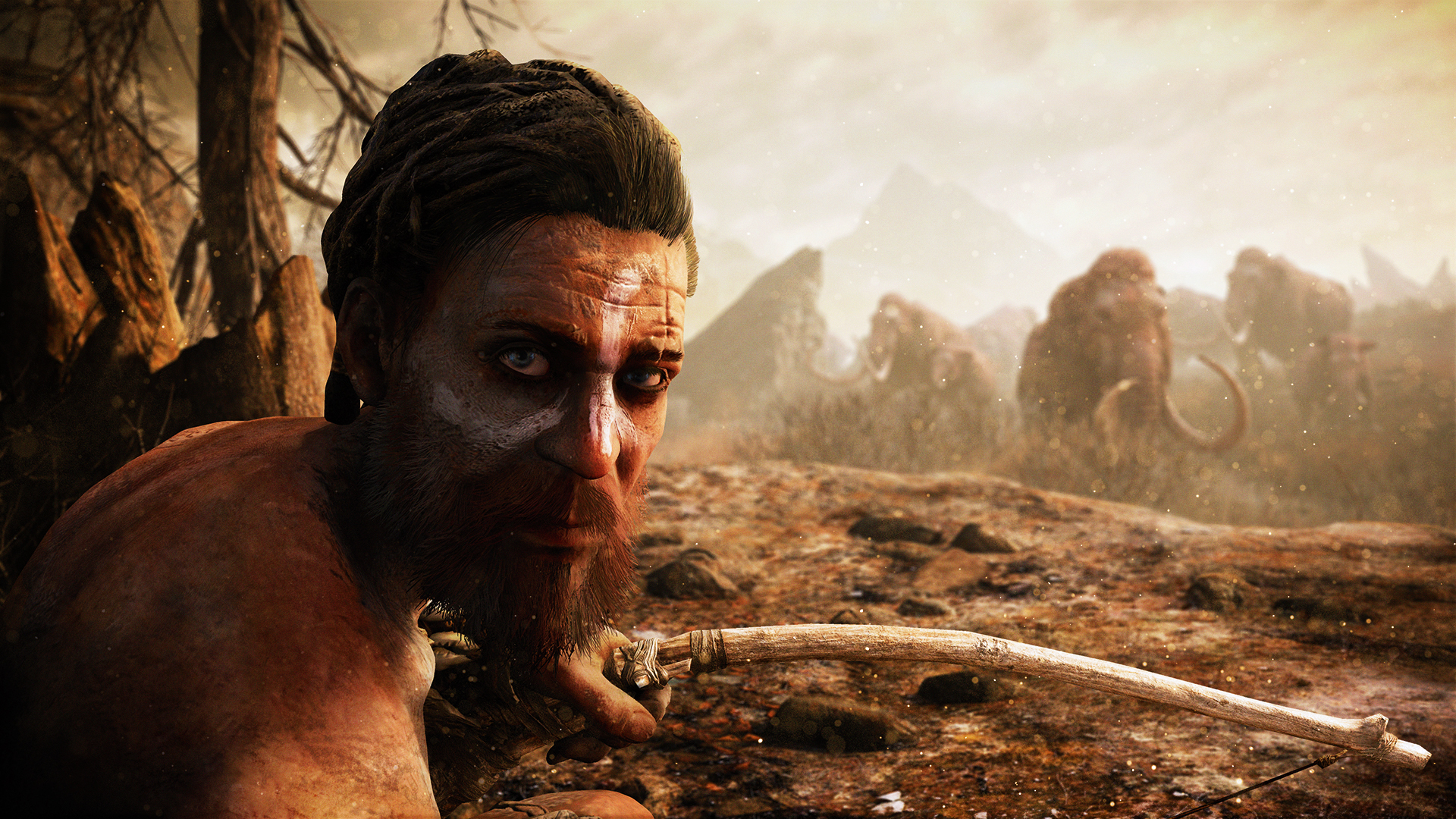 I didn’t like the look of Primal to start with.

It seemed far too much like a macho power fantasy with very little thought involved. See animal, beat animal to death with club, cut animal up,Â and wear its hide as skin. Swap enemies out for twenty hours, and there’s your game.

But Primal surprised me – what it lacks in depth of plot is made up with gameplay and graphics that make a pretty damn good final product.

The plot is simple; three warring tribes in Oros – Wenja, Udam, and Izila. They’re fighting for the land, and the Wenja are getting wiped out,Â hard.Â So along comes Takkar, Generic Cave ManTM, and he’s off to save the Wenja, gather them all together, and overthrow the other two tribes. Takkar doesn’t really progress or change; he just becomes the almighty Beast Master and stabs a bunch of people. Considering the smash hits the last two Far Crys have been with Vaas and Pagan Min, that was a big let down in terms of character development.

The side characters, though, are surprisingly fleshed out, and you get a ton of side quests to upgrade their huts, which in turn unlocks new abilities and more cutscenes with them. Level Tensay, you get more beasts for your arsenal; level Sayla, you learn how to gather more effectively. You might be sent off to recruit specialist people for your village to teach you how to hunt, or build better defences and weapons. Other times, you can jump in to rescue Wenja in distress, or escort some of them back to your village – it’s quite a good bit of variety, and you won’t get bored quickly.

The thing about Primal is, there’s some incredible attention to detail. The map, a complete reskin of 4’s though it is, is lovingly detailed. The foliage is thick, the water is cold, and the land is positively teeming with life. One problem I had with FirewatchÂ was that there was no wildlife at all in that lush forest, and Primal more than makes up for this. It gives Takkar plenty of fodder to hunt, and it makes everything feel like a legitimate threat. What’s that noise coming from behind you? Is it just one of the million deer that are skipping around the place, or is it a pissed off grizzly bear coming to maul your face? Especially when you’re either low-levelled or don’t have many arrows left, you can genuinely feel like your life is in danger a lot of the time. I know I didn’t risk venturing out at night for a good while.

Crafting is absolutely essential if you want to survive in Oros. Basically, you need to hoardÂ everything,Â and I meanÂ everything.Â Break off as many alder branches as you can, because those arrows won’t build themselves! Hoard so many red leaves, there’ll never be any danger of your beasts leaving your side, let alone actually dying. Animal pelts that aren’t deer? Oh, that actually requires a bit more effort. Most pelts are plentiful, but when you need specific ones (like badger pelts) they never show up in the spawn points, which is more than a bit frustrating, especially when you need them for hut upgrades… though in fairness, this is probably meant to encourage you to further explore the game and not try to rush.

The weapons are fairly limited, considering you’re a cave man, but are very fluid and easy to use. My beloved auto-aim from Tomb Raider is back for the bow and arrow, the spear is good for hunting the beasts, and clubbing skulls is surprisingly fun. The thing is, with Primal, it’s genuinely just fun.Â I’m having a good time clubbing yaks and nicking their skin to make a coat. Raiding an Izila camp? SET FIRE TO THE LOT! It may not be the most amazing game of the century, but it’s a good one. I’ve heard a lot of complaints, for example, that it’s a complete reskin of Far Cry 4’s map, but to someone who has yet to play a Far Cry game, it doesn’t matter to me. Oros is Oros, Kyrat is Kyrat. It’s entertaining and I can get a jaguar to follow me around, and that’s good enough.

There are a few hitches here and there – the animations for gathering and climbing are nauseating, I don’t get why Hunter Vision isn’t automatically activated and stays activated until you say so, and why they went to all the trouble of developing a Proteo-Indonesian language and have them all talk in broken English subtitles, but hey, you want a game to be fun, at the end of the day. And Far Cry Primal is exactly that.

It’s an 18 for a good reason – blood, violence, and apparently there’s a sex scene in there somewhere.

This review is based on a review copy of the game provided
for the purposes of this review.Â