Capcom has finally announced the release for the return of the Marvel vs Capcom mash-up franchise! Marvel vs. Capcom: Infinite will be available on September 19th for PC, PS4 and Xbox One.

To celebrate the return of this popular franchise, Marvel and Capcom will collide in an immersive cinematic Story Mode as heroes and villain must band together and take out Ultron Sigma. Along with a story mode, players can also expect single player Arcade, Training and Mission modes and multiplayer modes.

Along with the release date announcement, Capcom has released a handful of new characters that will be included in the game’s roster:

Each character will feature unique abilities, iconic special moves. The use of powerful, game-changing Infinity Stones further deepens the customized gameplay and allows players to equip and unleash elemental in-game powers, such as Time, Power and Space.

And seeing as this is Capcom, yes there’s a Deluxe Edition which includes a “Character pass” which will include six additional post-launch characters. Pre-ordering the game will reward players with Warrior Thor and Evil Ryu costumes. While those pre-order the Deluxe edition will also receive Gladiator Hulk and Mega Man Command Mission X costumes along the aforementioned costumes.

For those who like shiny collector’s edition, Capcom also unveiled a Collector’s Edition which will include four premium character dioramas of Iron Man, Captain Marvel, Mega Man X and Chun-Li, a case filled with six Infinity Stone replicas, as well as SteelBook packaging that contains the Deluxe Edition of the game for the hefty price of $199.99. 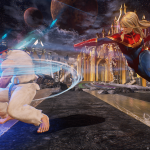 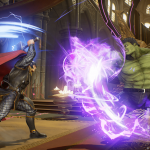