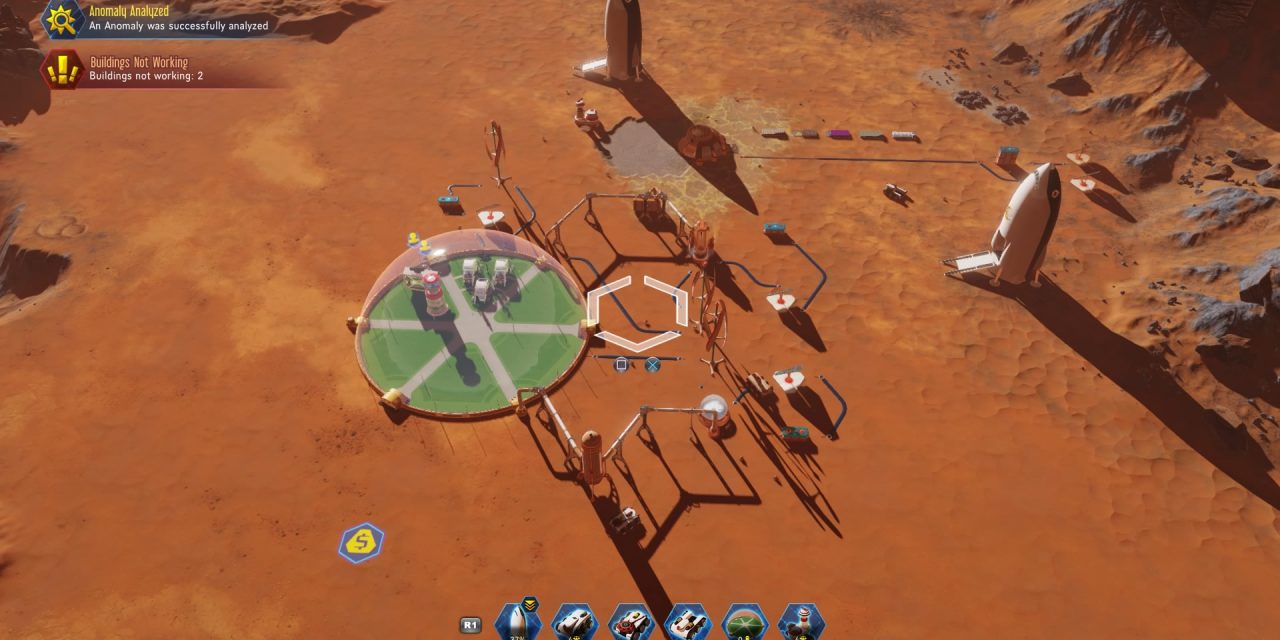 As Arnold Schwarzenegger once said in Total RecallÂ  – “Get your ass to Mars!” Well, in Surviving Mars, that’s exactly what you have to do.

Playing Surviving Mars has a very familiar feel to it;Â upon loading the game, I have the option of choosing some different backers to fund my Mars expedition, and these have an effect on the difficulty level of your upcoming space adventure. So, if you’re new to theme park-type games, it’s best to take the first option and get to grips with the controls first. However, all of the other options, if you increase the difficulty, it will offer different perks, like having some extra rockets to ferry colonists or supplies. These perks are only more helpful in the earlier stages of the game and are there to help you become self-sustainable more quickly.

Once you’ve picked through the starting options, you are given a rotating map of the red planet to pick an initial landing site for your first rocket. Whilst hovering over the map, you can see a difficulty gauge going up or down, depending on where you propose to land. Choosing somewhere in mountainous terrain presents the issue of the amount of available land that is flat enough to build upon, and choosing a location out in the plains can give you plentiful building space, but the hazards of frequent torrential dust storms. There are marked locations on the maps for beginners if you would like to pick somewhere that will give you an easier time of things.

Now we have picked the landing location and launched the rocket, the game begins. AÂ veryÂ simplified tutorial kicks in, telling you what tasks to perform first to help you start out, like scanning the surrounding area for mineral deposits, water, and mysterious anomalies. But whilst giving you some help as to what you might like to build, it does not hold your hand and is a bit hit and miss with showing which buttons to press for each feature. I found myself getting frustrated having to search through different button combinations to access the functions the guide was asking me to perform. These control options do become easier with practice and use, but for helping you to start out, I feel a little more could have been done in the tutorial, like including what buttons to use to select what the guide was instructing you to do, instead of just having a little “hint,” at the top of the screen.

Setting up of the first dome.

The graphics are simple and not particularly amazing, but this makes the framerates and animations very smooth; luckily the graphics in this type of game don’t have to be jaw-droppingly gorgeous, as the main emphasis is gameplay. Same with the in-game radio/music; you can select to have it turned off, or have a choice of four different stations to flit away in the background whilst you play. I enjoyed the music for the first couple of hours and the music went really well with the theme of the game, but it becomes stale very quickly. I also noticed some sound stuttering I was getting, with the music getting very choppy whilst the game was loading.

There are some great nods to sci-fi fiction writers and characters like Isaac Asimov and Captain Jean Luc Picard (Star Trek), as well as humorous achievement titles like Wubba, Lubba, Dub, Dub! (Rick & Morty). The sci-fi links also add to the adventure by offering hidden mystery storylines. Whilst conducting your mission colonising Mars, you will start to uncover and trigger these story arcs as you go about your micro-managing business. You can choose which story will be in your game by choosing the aforementioned sci-fi author or character at game creation.

The aim of Surviving Mars is to colonise Mars and start making a financial return for your backers on good old Earth. Although similar to games like Rollercoaster Tycoon and Theme Hospital, there seems to be a little more depth to the little details. Choosing your initial colonists should take a little time and thought, because if you look at the list of possible recruits for your expedition, you want to make sure you choose the right candidates for the job. Age, mental traits, and proficiencies all play a quite important role when setting up your first few domes.Â

The next stage is to micromanage your drones and resources, and shuttle in new supplies when needed, to keep the base ticking along nicely. Once you have your first colonists habituating your biodome, it doesn’t take long before they start getting jiggy with it and producing your first martian offspring. Keeping your colonists alive, however, is the biggest problem. Continuing developments keep occurring through the course of the playthrough, from environmental disasters like storms and meteors showers, to just running out of supplies and watching your base slowly fall into disarray. Meteors and natural events destroy or damage parts of your base, and these need to be quickly repaired or replaced by your little worker bots.

A close up of dome buildings and factories.

One of the best ways to protect against an instant disaster, and so save running out of an essential supply of air, power, or water, is to make sure you plan and construct some redundancy measures into your base. Make sure you have back ups for every service, including the food supply, because if crops fail to grow, you’re going to see your populace start to starve. Luckily with so much going on, there are handy pop up notifications to inform you of what’s damaged and if the people are happy, starving, or even going insane from not having enough exercise or a pretty garden in your dome to walk around. This can help you to keep tabs on what actions to prioritise next.

To make money, you can mine precious metals and start shipping the resources back on outgoing shuttles from your base; keeping the money ticking over keeps you in supplies. Also, finding anomalies and new tech on Mars can secure more financial sponsorship from your Earthen money lenders. But most importantly, plan to become self-sufficient. I found that getting in the prefab buildings that produce your machine parts, polymers, and electronics helped the most. Having several domes set up with multiples of each in them produced enough resources to help keep the drones actively repairing any malfunctioning parts of the base, and left enough left over to expand around the map to farm metals and cement.

Milestone Notifications of your colonisation achievments.

Overall, I enjoyed Surviving Mars; the more I played it the more little nuances I discovered, like choosing the right recruits for the job, setting up shift pattern in factories so they produce materials around the clock, and city planning my base infrastructure. My only real gripe is the speed of the game, as there is a pause button, and three different speed settings, but I always ended up on the fastest setting and felt like I was waiting around far too much for something to do. I would go make a coffee, come back and there was still nothing that needed my attention. Maybe I need to up the difficulty to get more out of Surviving Mars. Oh, and be warned, as with many games in this genre, single games can last a long time, so don’t rush. Now to see what these pesky alien sphere people are up to.

ESRB: E (For Everyone) and PEGI: No Rating as of this review. Space adventure and danger, with the occasional death of colonists through cold, starvation, or lack of oxygen.

Hey Zen Studios, You Got Portal in My Pinball

Games With Gold For May Announced