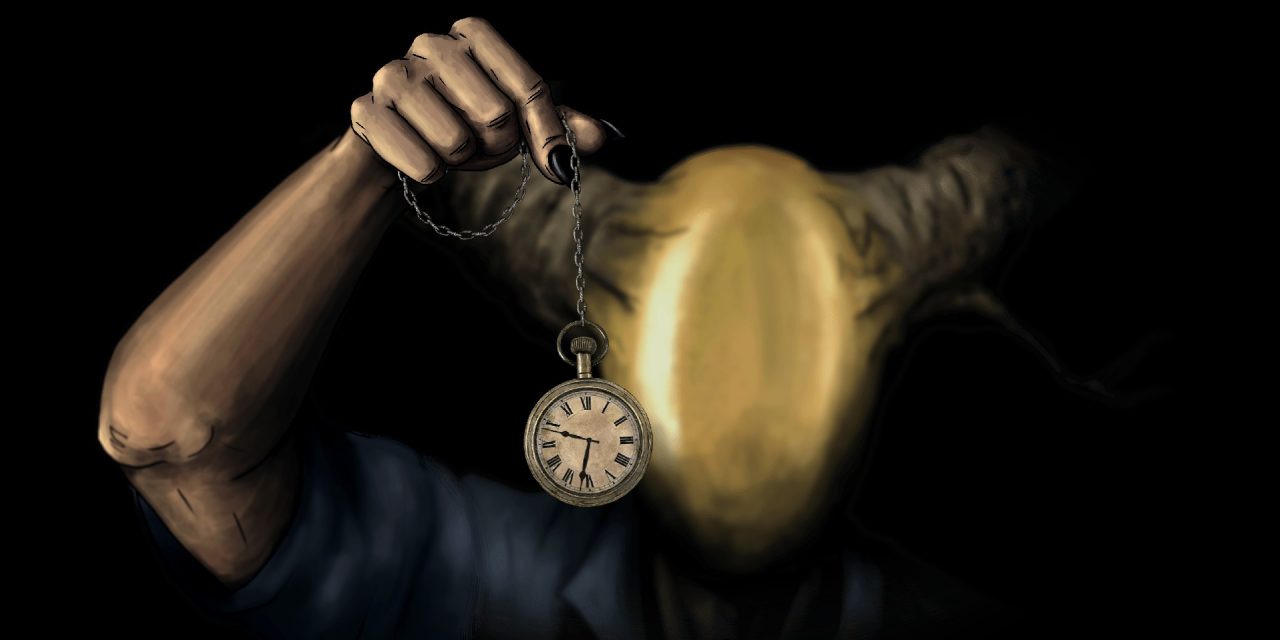 It was all a dream, used to read Minotaure magazine.

There aren’t many games that let you speak with the head of Salavador Dali while his famous clocks continue to melt and a giraffe brought to life from a painting stands awkwardly next to you. Not many games, no, but Dali Games’ Lucid Dreams does just that and more with its â€“ for lack of a better phrase â€“ creepy as shit design, making this point and click adventure a game well worth your time.

As you might expect from a game with the word â€œDreamâ€ in the title, Lucid Dream is a tale that explores the unsettling blur between reality and illusion. It’s a game singed with a dark fairytale-esque design that will strike a chord with anyone who watched the likes of Grizzly Tales for Gruesome Kids. Whether it’s the moment you’re asked by the moon to help remove a satellite from its eye, the land you come across that’s home to metallic flowers or the flying elephant that asks you to kill it; the game throws out some truly bizarre characters and settings that stand out, makingÂ  it the strongest aspect of Lucid Dream.

But the game is more than a trippy walk through Surreal Street; Lucid Dream is very much a point and click adventure. You play as Lucy who’s out to save her mother from a sickness, apparently caused by her grief for her late husband. In order to save her mum, Lucy will be doing a lot of observing, picking items up, combining them, and solving all kinds of puzzles. The puzzles themselves aren’t of the calibre that fans of Monkey Island or Broken Sword are used to, and the majority are a series of collecting bits and pieces and combining them – getting a monster to eat the leaves from a branch then attaching a vine to create a makeshift fishing rod, for example. But there are a handful brain teasers that’ll have you bleeding from the head due to prolonged scratching.

Take a puzzle a little later in the game; to open a door you need to move three parts of the door to make a symbol, and to do that you need to find four levers. But the levers are dotted around a part of the room that needs you to teleport, collect them, and then teleport back in a specific order that allows you to take the levers with you â€“ get it?

Well, neither did I and it’s something that’ll happen with a handful of puzzles that Lucid Dream throws at you. So, it’s a nice touch that the game works on a time limit. Every time you spend more than five minutes on a puzzle, the game will give you a hint token that you can use if you want to. It’s an excellent inclusion that makes seeing a frustrating puzzle through to the end a whole lot easier. Though, like so many other point and click games, Lucid Dreams does have a habit of making you go pixel hunting, a frustrating compromise we tend to make with the genre and something that will most certainly irritate you when you know how to solve a puzzle but can’t find a bloody rubber strap because it’s hanging from a branch and is getting lost against the dark background.

But what about all those colourful characters? How do they fit into the game? Well, during Lucy’s adventure to save her mother, she comes across each of these characters, helping them solve problems or taking advice from them. I know it’s a bit reductive to compare a game to a film, but the whole series of incidents that unfurl throughout the game forces comparisons to the stellar Pan’s Labyrinth. It’s the style of the characters you encounter that toe the fragile line of being friendly mystical… things, and being down-right unsettling, with horned demons asking you to make deals or the poor customer service you receive from the ferryman, Charon.

And I should point out that the game’s story is nothing to wave away. Anytime a game attempts to handle death as a theme it’s a bit of a gamble. But Lucid Dream does manage to weave a compelling tale, as it focuses not only on the grief that a death brings about but also how that grief can isolate us from those closest to us. It’s the gentle handling of such a hefty theme that serves the game well, unravelling Lucy and her mother’s grief by wrapping it around the bizarre adventure that Lucy takes, letting the grief come out in drops.

The only thing I would say about the story is that Lucy â€“ who is admittedly a nine-year-old â€“ seems a bit dismissive of all the nonsense going on around her. On several occasions, she’s asked to travel to a whole other planet and every time she’s basically saying â€œCool, okay. Well adventure, I hope you’re ready for Lucy!’ Before charging off. I honestly can’t tell if it’s sloppy dialogue or if Dali Games have solved the riddle of adults trying to sound like children.

Look, if you hear the phrase â€œsurreal indie point and click gameâ€ you’ll probably be able to choose a solid five or six games that are just that. But Lucid Dream is something quite special; mixing an excellent realisation of the surreal, challenging puzzles that leave room for help if you need it, and a story that doesn’t dance around just how rough the grief process can be. It’s a game that you can finish in an afternoon, but what an absolute result of an afternoon that would be. Basically, go and play Lucid Dream â€“ it’s really good.

Lucid Dream doesn’t have an age rating at the time of this review. But the tone of the game as well of the subject matter would probably suit children from around 12 or older. It could be a fairly creepy game to play together.

Disclaimer: This review is based on a copy of the game provided by the developers for the purpose of this review.

Dying Light 2 will arrive in spring 2020