I’ve already spoken about the first and second episodes of Big Bad Wolf’s The Council in some depth, so this review is more of an overview of all the bits and pieces flying around the game. Because more than anything, The Council shows that there’s still a fair bit of life kicking around in episodic format. And while I adored that melodrama that the game delivered in early episodes, the entire game does so much that it warrants more than just a guilty pleasure love affair.

We hear a lot of talk from episodic games about your decisions having a real effect of how a game plays out but they rarely live up to the promise, instead manifesting themselves as gentle reminders of something you’d done before. In The Council, the decisions you make stick with you to a wonderfully unforgiving degree. There are a few times that you might mess up an action or one of the game’s many confrontations, and even with the episodic style of the game, you’ll be caught thinking that the game will let you just retry. Nope, when you settle on a choice in The Council, you’re stuck with it. It’s a refreshing amount of trust given to the player in the game, and once that the writers of The Council have done their best to ensure all narrative branches are covered.

And while you might see the odd confrontation bounce between a verbal takedown from one of the game’s many characters before they then chuckle along with you in the next heartbeat, it’s an overall excellent treatment of the episodic format that’ll have you second-guessing yourself over and over. Add to that the replayability value that each episode of The Council offers and it’s no exaggeration to say that The Council is easily one of the most reactive episodic games around right now.

Given that you’ll be spending the game trying to dance your way through conversations between a host of history’s most influential figures as Louis, The Sidekick, de Richet, there’s more than enough reason to replay an episode of The Council. Because whether it’s the moments you butt heads with Manuel Godoy over the future of Spain, trying to blag your way through a sales pitch with Napoleon, updating Mortimer and Piaggi about the ongoing search for your mother or – my constant favourite – gossiping with George Washington, each conversation you have is swayed by how you’ve equipped Louis for that episode.

With a host of different skills to focus on, it’s near impossible to max Louis out on all of them by the game’s final episode, but you’re able to do enough to hold your own in a few fields of conversation. You can throw your weight around when speaking about politics, make sure everyone knows that you’re a connoisseur of the arts, be the group’s go-to guy for occultism or… geography.

You’ll end up tailoring your Louis to a selection of these skills at the beginning of a new episode and each of its chapters, spending either character points or equipping manuscripts to develop Louis’ understanding of a particular topic. Specialise in manipulation to make subtly controlling a guest that bit easier, or subterfuge to help you out with lockpicking a box. The skills extend beyond the knowledge that Louis can show off in conversation, allowing you to have a more practical character. Ultimately, the selection of skills opens the game up in two surprisingly broad ways, and while it doesn’t have a huge impact on the overall game, it does affect the way you’re able to go about the story in a way that means you might have no choice but to kick a door open to get through, before having to rely on your manipulation skills to convince old man Piaggi that you had no choice but to boot his door in.

Of course, you’ll be doing more than just tricking old men about random acts of vandalism. The Council might seem like a jaunty little melodrama at some points, but it takes puzzles very bloody seriously, putting your knowledge of an assortment – but mainly theology – to the test. In a way, the grandeur of the puzzles fits the tome of the game perfectly; convoluted tests of intelligence that are all concocted to trip you up with detail. I don’t mean that as a drawback either, the puzzles littered around each episode of The Council recreates everything the game does so well but allows you to slow down with everything. While confrontations push you to answer with a time limit, the puzzles leave you second-guessing yourself, overthinking everything as you try to ensure you reach the correct outcome.

Because, as I mentioned, The Council rarely puts you on a spot where a failed puzzle attempt forces you to retry. Instead, the game simply rolls its eyes and sends you on your merry way until you realise you’ve made a fatal error; landing you in a situation where you’re locked in a room or carrying a wrong object, turning them into ticking time bombs of social faux-pas. It’s this extension of the game’s reactive storytelling that keeps you double and triple checking everything you do before you finish a devilish selection of puzzles that see you breaking into a secret tomb, forging a letter, or decoding a series of messages, along with many, many others.

All of the game’s strengths are backed up by a stunning setting. You spend the entirety of The Council running around the lavish surroundings of Lord Mortimer’s estate. I’ve spoken about some of the standout segments of the setting in the first two episodes of the game, and a little unfortunately, everything you see in those early episodes is pretty much the entire catalogue of Mortimer’s home. That’s not to say it isn’t any less grand; you can easily waste away your time in the game simply sauntering through the various rooms, taking in the view of the waves smashing against the rocks that the dining area overlooks, staring down a spiralling library that descends into some kind of literary abyss, or listening to Louis explain away the context and meaning from the game’s art collection (seriously, it’ll save you a trip to the National Gallery).

The great thing about the game’s setting is that it’s one that feigns character. Much like the sprawling library of Gatsby’s that was filled with unread books, the décor of Mortimer’s home almost projectile vomits culture. And while Mortimer himself bears no comparison to Fitzgerald’s love-struck anti-hero, the surroundings somehow manage to toe the line between making you feel as if there’s a constant need for his intellect to be recognised while at the same time painting Mortimer as a yesteryear supervillain.

But there’s a downside to the game’s grand setting; it’s not a major flaw but it’s one that introduces a handful of hiccups to the game. Framerate jitters occur at moments as the game tries to drag all of its lavish assets to the floor, and characters are prone to snapping from one posture to another during conversations that make you feel like you’re watching a badly edited video, and I came across a couple of moments when the voice acting just disappeared. There’s nothing major about these snags and they do little to take away the fun of the game. It’s more a sacrifice the game seems to make due to the scale of its design. When I started playing The Council way back at the start of 2018, I enjoyed its over the top drama, its ingenuity in trusting the player far more with the consequences of speech and actions, and the game’s gaudy design. Since that first episode, The Council has built on its strengths, the characters you interact with grow increasingly friendly or abrasive as the game moves on, puzzles work to really test your memory and wider knowledge, and the story manages to spin on its heel flawlessly. It’s still a game that manages to produce some amazingly farcical moments, with some decisions turning the manor into a madhouse by the game’s finale, but its also able to take you on a well thought out journey of both philosophy and politics.

I’m not the biggest fan of the episodic narratives, but The Council is a benchmark for the genre, demonstrating the freeform narrative and gameplay that so many of its contemporaries attempt to deliver but rarely do. The Council does though, it delivers on so much more than I – and I expect many others – thought it would be able to and I’m more than happy to say that the game eclipsed my expectations for it, making it a must-play title for fans of the episodic style and generally anyone who like a to be strung along by a story.

If your kids have a solid grasp of eighteenth-century politics, literature, art, and theology then get them involved. If they don’t, well, maybe get them to read a book or two before they try The Council out. 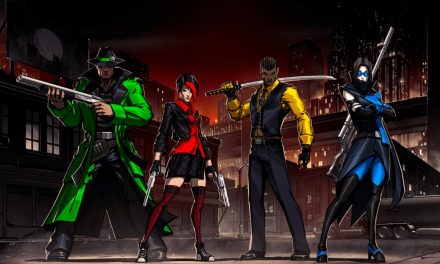 Return To The Slopes With More Content For Steep