There’s a sandstorm coming, and we all best be ready when she does.

Timing is everything with a game’s launch; release something ahead of its time and it’ll be lost on those who are playing it; release something too late â€“ even a little too late â€“ and it runs the risk of being drowned among the news of its competitors. And with the news of CS recently going free to play, I can’t help but think that : Sandstorm released at the one time that will see it have to secede some of its allure to the now free CS:GO. Not because Insurgency is a bad game, far from it, but because it’s a game that bears such a striking resemblance to Valve’s tactical shooter that new players looking for a ground-zero in these types of games have been handed one for free.

But hey, that’s the cruel world of games, right? So let’s focus on what Insurgency does well, and there’s a lot to talk about in that regard. Because even though the beta wasn’t flawless, it lays down a solid foundation for the game. I would say that Insurgency takes some time to get to grips with, but it’s well worth that initial feeling of constant confusion as you try to fumble your way through a warzone, getting shot every other step. Because once you’ve settled down and figured out what’s happening, you see a very well put together tactical shooter; in its maps, its weapons, and while it didn’t have quite the catalogue of game modes I’d hoped for, there’s enough there to keep you coming back.

The two game modes on offer feel very much the same, with players playing out the classic territory grabbing objective gameplay. So, every match you either look to gain or defend one of three areas, if you’re on the offensive and manage to snap up objective A, you’ll have to ward off a counter-attack from the opposing side before you get a chance to move on. Straight away, this opening objective is paced almost perfectly, offering up only a handful of chances to take over the post means that you and your team become more cautious with each attempt. You’ll naturally look for whatever environmental advantages a map offers, whether that be sprinting between rubble as you try to get eyes on the enemy or moving to higher ground be that in buildings or the natural groves and hills in some maps.

What’s so bloody brilliant about these kinds of games â€“ and something I’m forever grateful for â€“ is the natural grooves teammates fall into. My time with the beta demonstrated just how well a bunch of strangers can work together, with the beyond-brave souls who give little pep-talks during intervals between one and the next, while others â€“ myself included â€“ manage to get by with unspoken teamwork. It’s the way a group will part into two of three small groups, zeroing in on the objective. And it almost feels like art when great things come together.

At one point a teammate and I approached a door, I kicked it down, a flash grenade gets thrown in, and then we move in together, picking off the player inside. And it’s just as good when you succumb to an excellent piece of play. During one match, I ran into a room, an opposing player threw a smoke grenade in after me and then a petrol bomb was lobbed in before I died. Harrowing? Fuck yes, but when you die in a way like that, you can only appreciate it as an excellent play.

My only concern for this part of the game â€“ as is the case with so, so many team-based games â€“ is how Insurgency’s community evolves. I came across a handful of moments in the game where players weren’t quite being needlessly dickish but they were getting close. Of course, for every twat, there’s a good three or four players who stamp it out or at the least make it clear that it’s just a game. Insurgency: Sandstorm’s reputation will live or die by the community it garners, and I just hope that it manages to buck the trend of becoming a game with a toxic inner circle.

Again, it’s just the cruel nature of games I suppose, so let’s get back to what the game is all about. While the variety of game modes might be lacking at release, it’s more than made up for by the maps and classes of Insurgency. There’s a good variety of both in the game, with maps following a specific theme of wartorn villages and towns, giving way to a host of small houses or barns to spy from. Likewise, classes are cut up into a host of different playstyles, with roles like an observer or commander being infinitely useful if you know how to play them properly. Both of these work in tandem to achieve things like summoning devastating airstrikes but are fairly impotent unless you’re playing with a solid group of players that know how to communicate and who to stick with.

But there’s enough roles in the game to cater for those of us who didn’t accidentally enrol in the army. Classes like the rifleman and gunner are great for close to mid-range combat, while scouts and the like cater to those of you who are handy with a sniper rifle or bolt action rifle. It’s worth trying out each of the classes in the game’s single player version of the modes â€“ yes, you can play solo and it’s bloody marvellous â€“ not only to practise with each of those outfits but to understand the finer points of the game. Insurgency isn’t a game where you can rush in and be a one-man murder weapon, you need to understand how combat melds together with movement and using you team effectively.

Insurgency is going to have a long post-launch development, that’s been made clear from various dev updates, and it can only bode well for the game. It’s got a strong foundation to build on but there’s still some way to go in the game’s . Issues with lag forced me to play the majority of the game with low settings so as to keep a map from clipping madly. Similarly, while the game modes are a lot of fun, there has to be more variety other than capturing territory. I’m not sure which alternatives the game could offer that fit in alongside the realistic tit-for-tat style that guerilla warfare brings about, but a handful of other game modes would be a welcome area for development.

Overall, the early signs for Insurgency are good. As I said at the start, the timing of the game’s release may not be on Insurgency’s side but it’s a game that’s apparently going to continue to get a lot of love post-launch, so it’s well worth keeping an eye on if you’re in the market for a new tactical shooter. And considering there’s a single player version that offers all the same game modes as the online mode, if competitive matches aren’t quite your thing but you love the brisk combat the game offers, then the game obliges those of us who prefer fighting our own battles too, something that really pushes Insurgency into being a great game for me.

Insurgency: Sandstorm throws you into a bloody war-zone where you’ll be running around shooting people for some unexplained reason. Probably not one for the kids.

Disclaimer: This review is based of a beta version of the game provided by PR for the purpose of this review 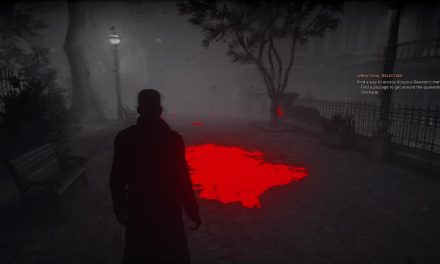 Vampyr Will Get Two New Game Modes in Content Update

Overwatch – The Guardian of Numbani, Orisa is now Playable!